Christmas festival is a time to celebrate with family and loved ones. Well, the Kapoor clan is keeping up with the tradition of celebrating Christmas with zeal and enthusiasm. Recently, Kareena Kapoor Khan along with her husband Saif Ali Khan and sons Taimur Ali Khan and Jeh Ali Khan has arrived at Shashi Kapoor‘s son Kunal Kapoor‘s house to celebrate Christmas by having a family lunch. Kareena, who recently recovered from COVID 19, was seen holding Jeh in her arms. The family happily posed for pictures and also waved at the paps. Taimur could be seen wearing his mask. In the pictures, Kareena donned a black tee with leather brown pants and heels, while Saif wore a casual polo neck tee with jeans. Taimur looks cute in a white kurta-pajama with black shoes and Jeh wore a light blue shirt with jeans. Kareena was missing her kids when she was in quarantine and had even mentioned on her post that she was eager to hug her babies. She even revealed that Saif stayed at a hotel while she was quarantined at home. Also Read – Bigg Boss 15: Salman Khan celebrates his pre-birthday bash with the RRR team Alia Bhatt, Jr NTR, Ram Charan and S.S. Rajamouli – view pics 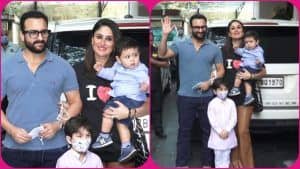 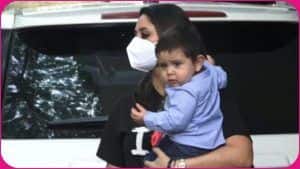 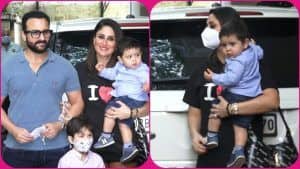